Who will be your wedding ceremony officiant?

If you’re not getting married in a church, one of your wedding planning tasks will be finding an officiant to perform your ceremony. (Which I don’t think should be “as short as possible!“) One very good option is to find an experienced wedding officiant to guide you through the process and take charge on the wedding day.

But here in Pennsylvania, there’s another option. For couples willing to do the work of writing their own ceremony, you can request a special license, known as a “self-uniting license” or “Quaker license,” that doesn’t require an official signature from a state or church official.

How hard is it to get one of these licenses? So very easy. In fact, the process is exactly the same as a standard license. When you go to your county office, (here’s the link for Allegheny County) you simply ask for a self-uniting license. Instead of a license with a signature line for an officiant, there are two lines to be signed by two witnesses. Fill it out, file it with the county, and you’re married!

This way, your ceremony can be performed by anyone you know – and there’s no need for them to be ordained online (Pennsylvania doesn’t recognize this kind of certification anyway). Friend, cousin, aunt, uncle. My own wedding ceremony was performed by my dear uncle Don, who is not only a beloved family member, but also a gifted writer and eloquent speaker. Having someone who’s been a big a part of our lives play a crucial part in our marriage ceremony made it all the more meaningful to Matt and me.

Leigh and Scott also chose a self-uniting license. Here’s why, in Leigh’s own words:

Our friend performed our ceremony. She is not ordained in any way and is not a professional speaker either.
We decided to go this route because we wanted the ceremony to be really meaningful to us as a couple. We have been to what seems like a bazillion weddings and unless the officiant  knew the couple, the ceremonies all seemed the same with maybe a personal story thrown in there, or else the officiant went “rogue”. We had been to a couple ceremonies where a family member or friend officiated and it was fabulous, so personal and moving to those people in the crowd who knew the bride & groom best. That was the kind of experience we wanted, not just for us but for each person in a 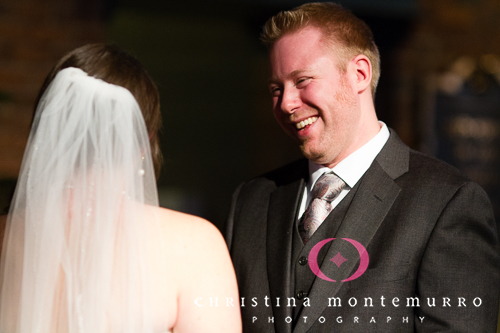 ttendance.  Also, Scott and I are not religious and so having a ceremony officiated by a religious figure did not make sense for us.
So Scott and I, along with Erica, our “officiant,” spent a lot of time writing and re-writing the ceremony. There are a lot of examples of ceremonies online, and so we chose our favorite parts from several to use as an outline. Fortunately both Scott and Erica are excellent writers. We had readings from some of our favorite authors, since we both love to read and the quotes were very meaningful to us.
We would not have changed a thing about the ceremony, or having Erica officiate. We had so many people tell us how the ceremony was very “us” – that they loved how unique it was, and how moving it was particularly once they knew we wrote it ourselves. Even our family members who are very religious and conservative.
Maybe it was a little more complicated since we had to write it. But it was ours! It made the ceremony mean something more, to us. Also, we could pay the “officiant” in beer and a few dinners out.
====================================

Christina Montemurro Photography specializes in photographing Pittsburgh weddings and bar mitzvahs. Using a photojournalistic approach, Christina provides extraordinary attention to detail and customer service. Christina loves to work with happy couples who want to look their best in their wedding photos, but still look like themselves, not models in a styled shoot for a wedding magazine.