Invasion of the Geotrax trains 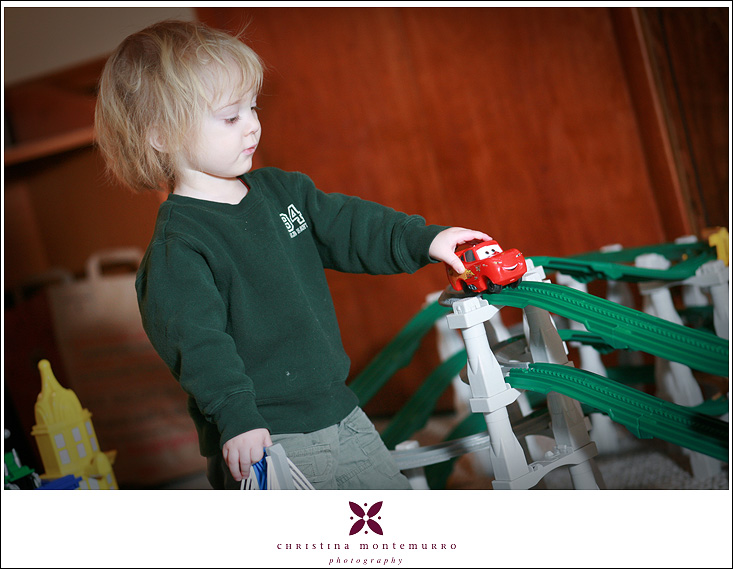 Our story begins during Christmas 2006 (and ends with a contest!), when we bought then almost-2-years-old Leo a Geotrax train set for Christmas. Matt assembled the train tracks, and Leo promptly destroyed them. He’d play with them for a little while, but inevitably found stomping on everything far more entertaining than watching the trains chug along. He did enjoy it enough that we acquired some additional components. “Some” being the key word here – that’s nice and vague, right? I suppose “a lot of” additional components would be more accurate. We enjoyed playing with them throughout the winter, but eventually nicer weather brought us outside more with less time for trains. Leo’s continued destruction of our construction may have played a little part too.

Geotrax is suggested for age 2 1/2 and older. At the time, Leo wasn’t quite 2 1/2 – just a few months shy of that. We wondered how much less destructive he would be in a few months – could he really change that much?

The trains went into hibernation in Rubbermaid containers in the basement. They came out a few times when requested by visiting friends, but quickly went back into the bins.

Until…. January 2010. Leo is now almost 5, and Jonas just turned 2. His favorite birthday present was a Cars-themed GeoTrax, complete with a super-fast Lightning McQueen. We set it up in the dungeon basement, and then I started adding on our old tracks.

And then rearranging them.

And then adding some more.

And rearranging some more.

I think I might have gotten a little obsessive about it. I’m not sure a completely rational person would have the patience to put all the trains together. I generally don’t get into a project like this, but for some reason, the past few weeks I have really enjoyed assembling all the tracks, adding ramps, and seeing how high we can get the tracks to go. Of course the motivating force is watching how much the boys enjoy playing with them, and fortunately, most of the time they play side by side and don’t fight over the trains. (Most of the time. Definitely not all the time.)

Thinking about this, there are some signs of obsession. In the following list, ONE of these is NOT true. Which one? Leave a comment with your guess. The first person to guess correctly will win a $10 gift certificate to iTunes.

Although Jonas is the same age Leo was when the Geotrax first arrived, his approach is completely different. He has not once intentionally broken any tracks, and instead is fascinated for hours pushing trains along the tracks or working them by remote control. And thankfully Leo doesn’t destroy them (intentionally) any more either.

They both love to hang out in a loop of ramps, as pictured below. 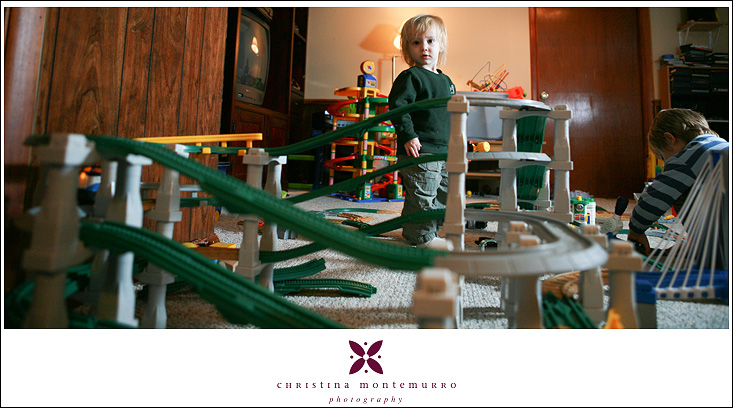 I love finding ways to creatively frame subjects. I knew I had to find a way to shoot through one of these suspension bridges. So I lay down and waited for Jonas to get in just the right spot so I could see him through the bridge. 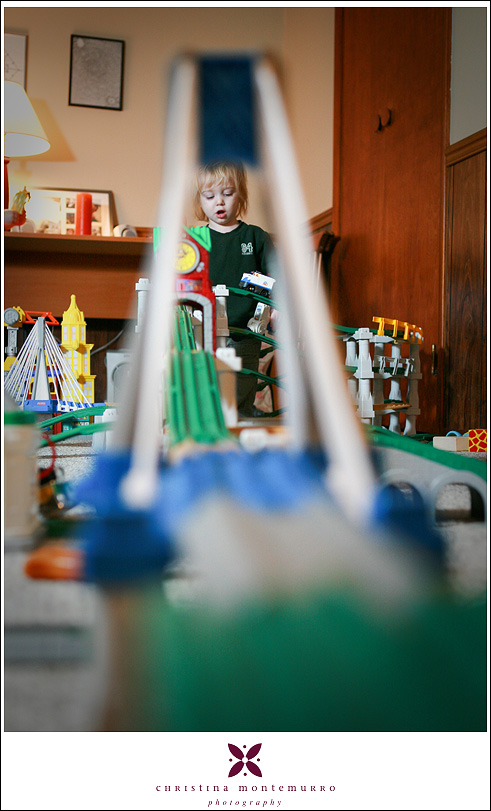 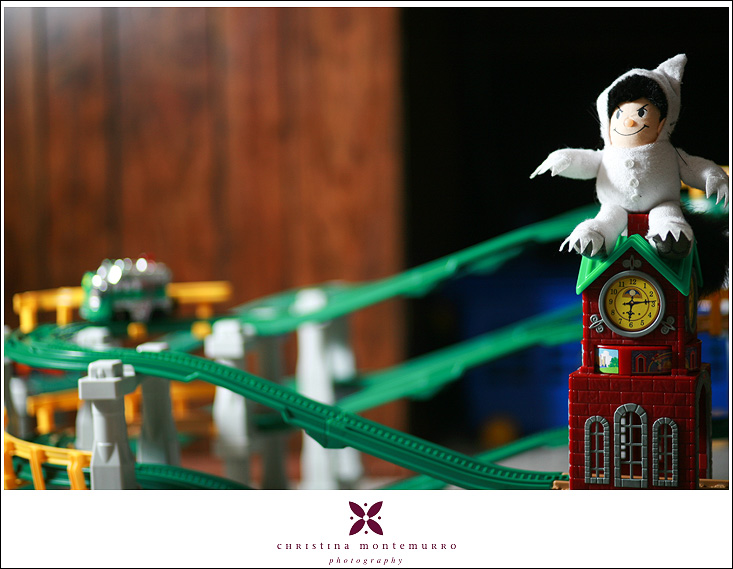 He’s probably thinking, “aww man! I left my controller all the way over there.” 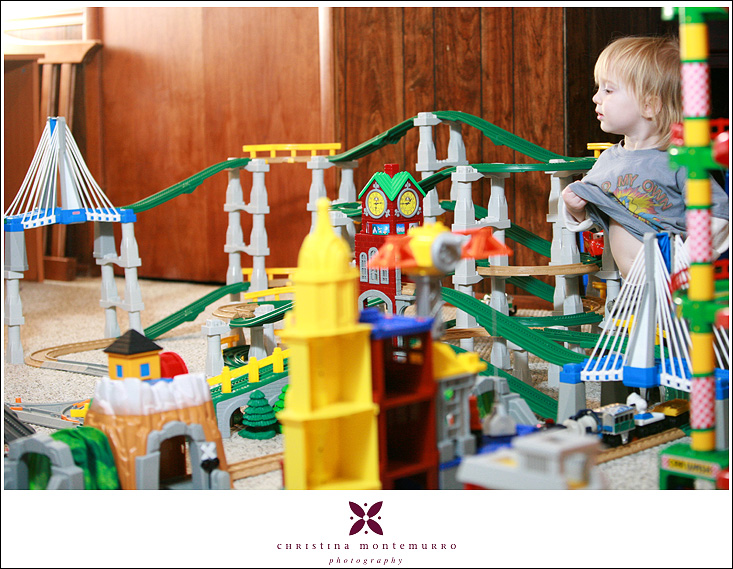 Sometimes, trying to get out of the loop can be tricky. 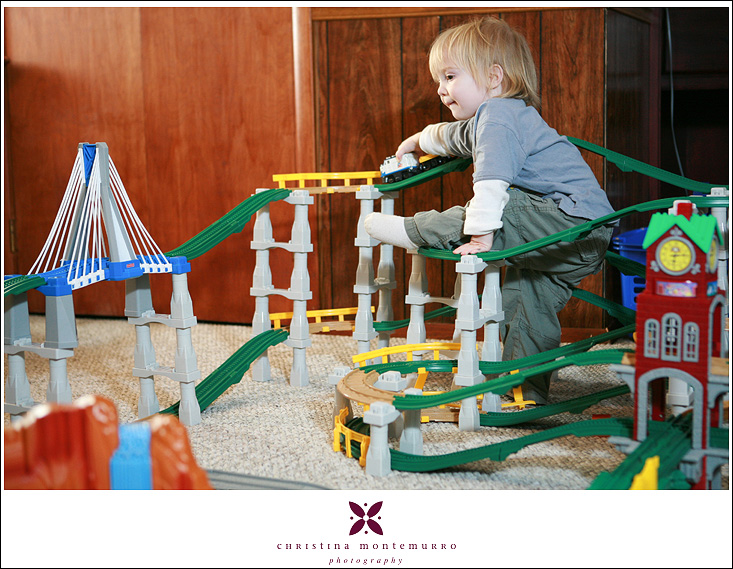 But that’s what big brothers are for. 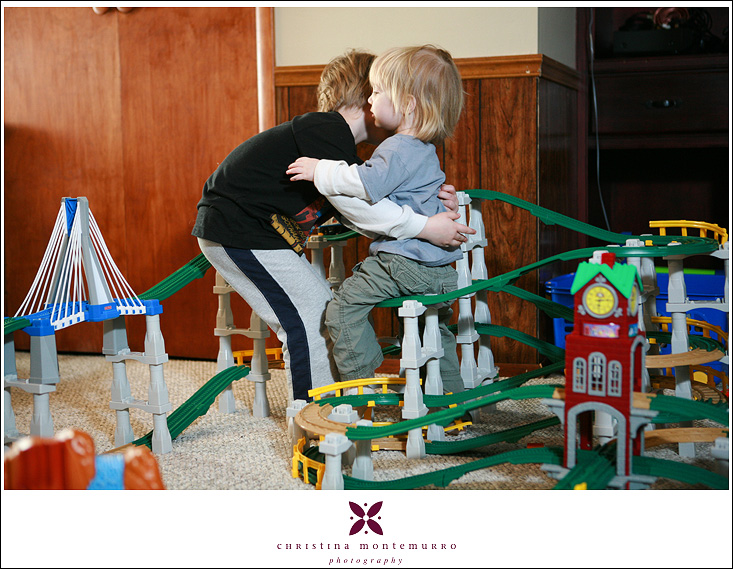 Just hanging out in their chairs, watching the trains. (Flash gelled yellow, I was playing around with creating a sunset feel indoors.) 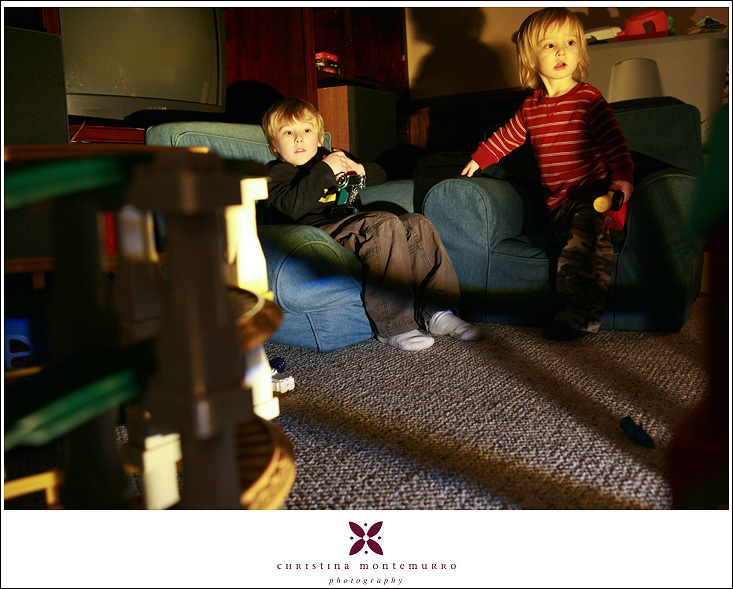 Finally, a little fun with off camera lighting. This is a two-light setup, with one flash on the track behind the building, and one behind camera right for some fill. 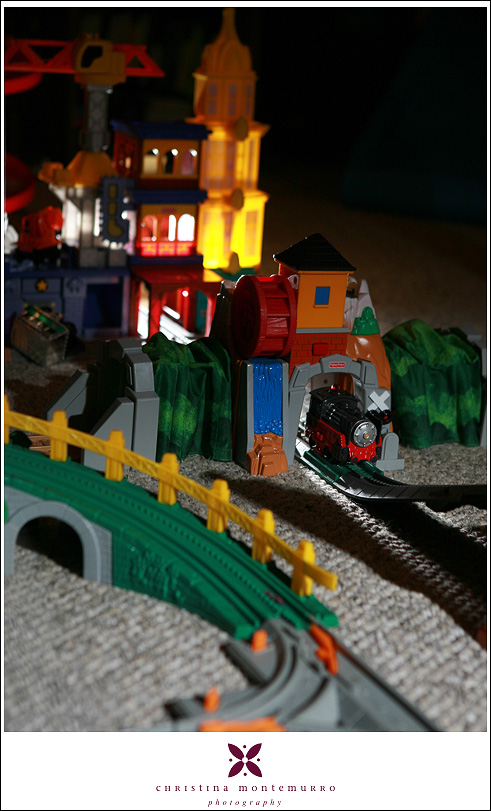 Gelled blue flash is firing through the tunnel right behind the Sheriff. 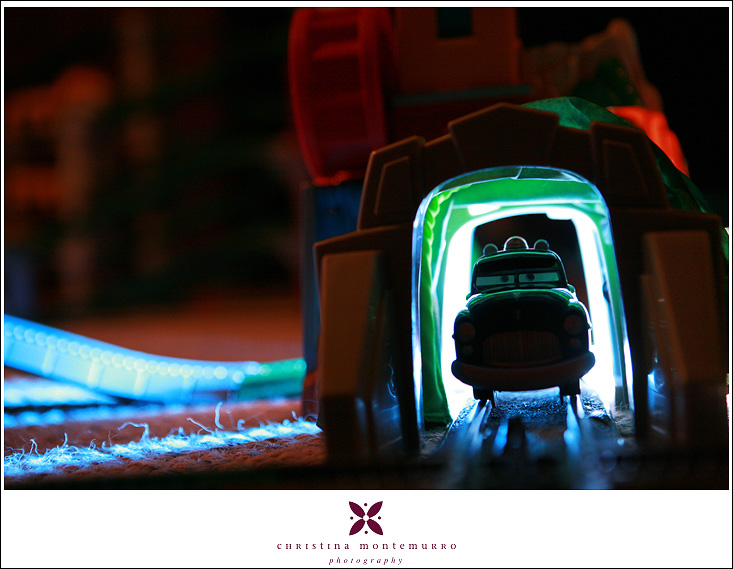 Gelled yellowflash firing through the city. 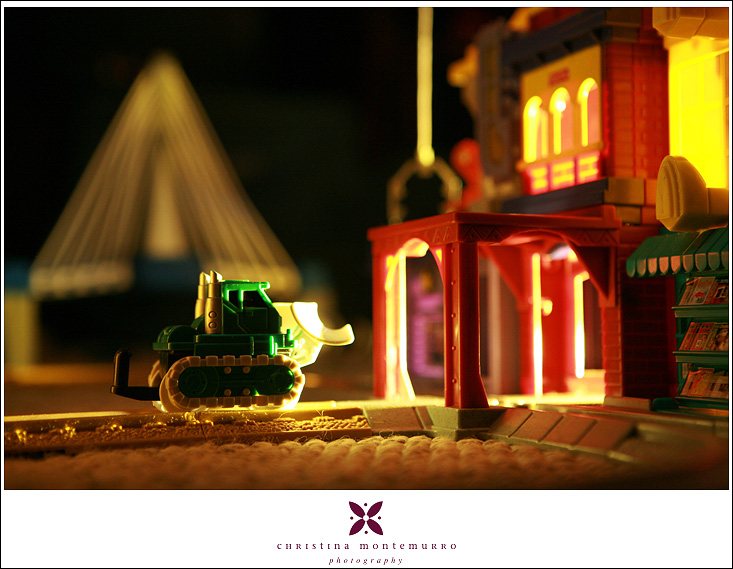